This was one of the places on my list of places to see. The campground was close so we arrived at the first stop pretty quickly.

There used to be an arch but it collapsed in 1940. 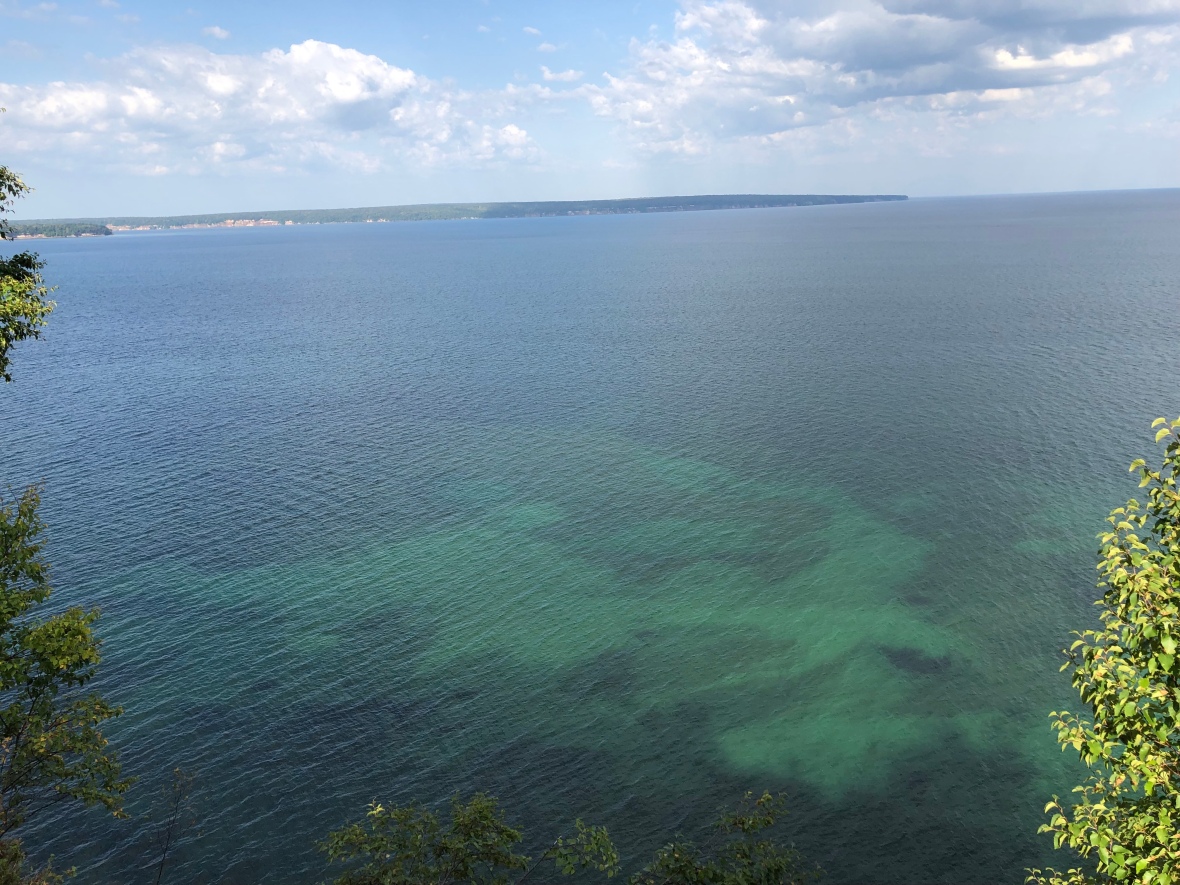 There is a sandy beach around the bend from here that we saw signs to on the way here. It’s a bit of a hike and I wanted to get to the boat to get tickets so we opted out.

We walked over and down 1000ft to the lower observation deck. 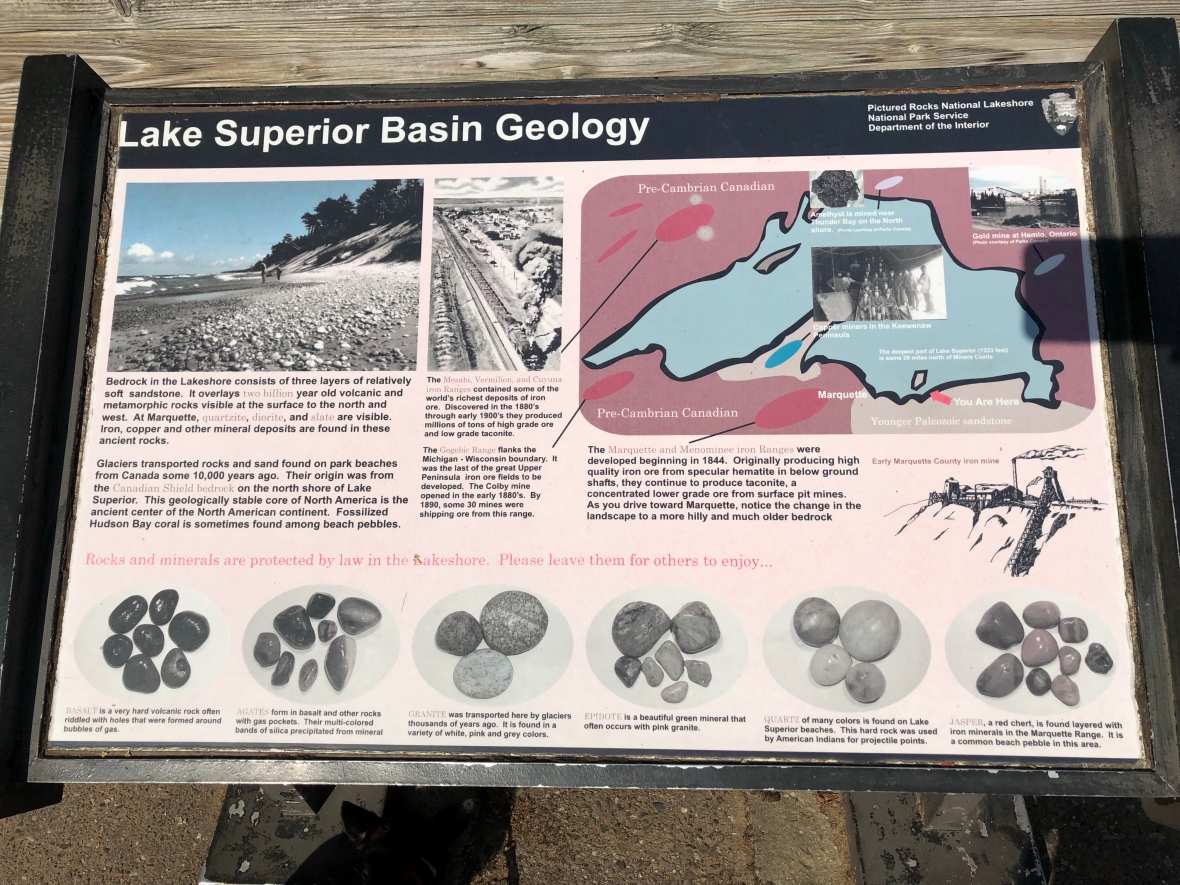 You are pretty much on top of Miners Castle standing on the deck. 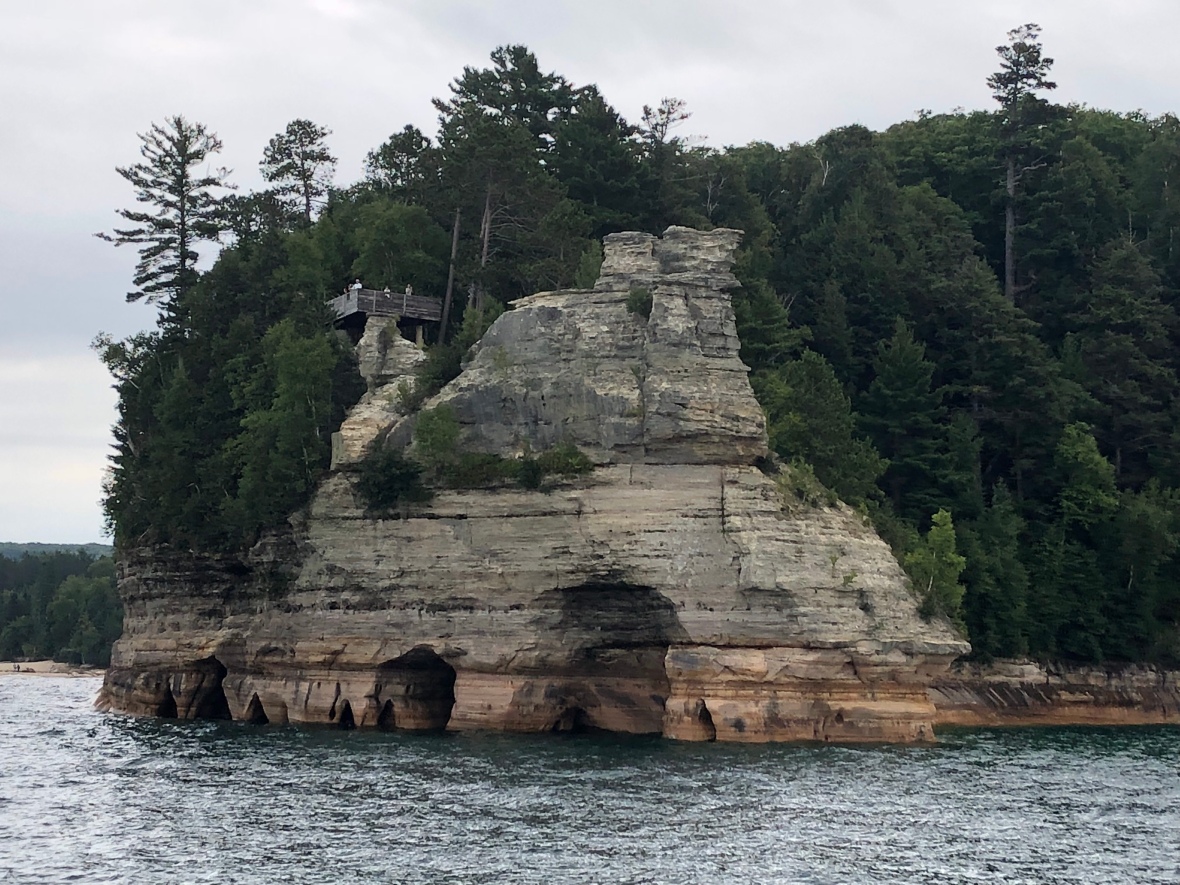 This is the view from the water. I had my Nikon around my neck and leaned close to the rail. The lense bumped the rail and the cap popped off, rolled behind me and… through the crack in the deck! Bouncing off the rocks and plunging many feet below…super bummer. 😢

We drove to Munising and found the cruises without a problem. We had little while and finally had cell service so asked where to eat that had internet. We were directed to the Falling Rock Cafe.

I ordered a BLT w/avocado and grabbed my number (section of log about 2″ in diameter and 12″ long) and found a seat. Connected to wi-fi and trued to update the blog and check on other things. The food was excellent and the cafe’ was cool. I looked up at the old books the lines the bookshelf

I was advised to arrive early and try to get a seat on the upper deck on the right side.

We arrived 45 minutes early and there were already about 30 people in line. The temperature had dropped about 20 degrees, the winds picked up and the sky darkened. It wasn’t supposed to rain but the lake was a bit choppy. Or bumpy as the captain called it.

Here is the blast of photos I took. 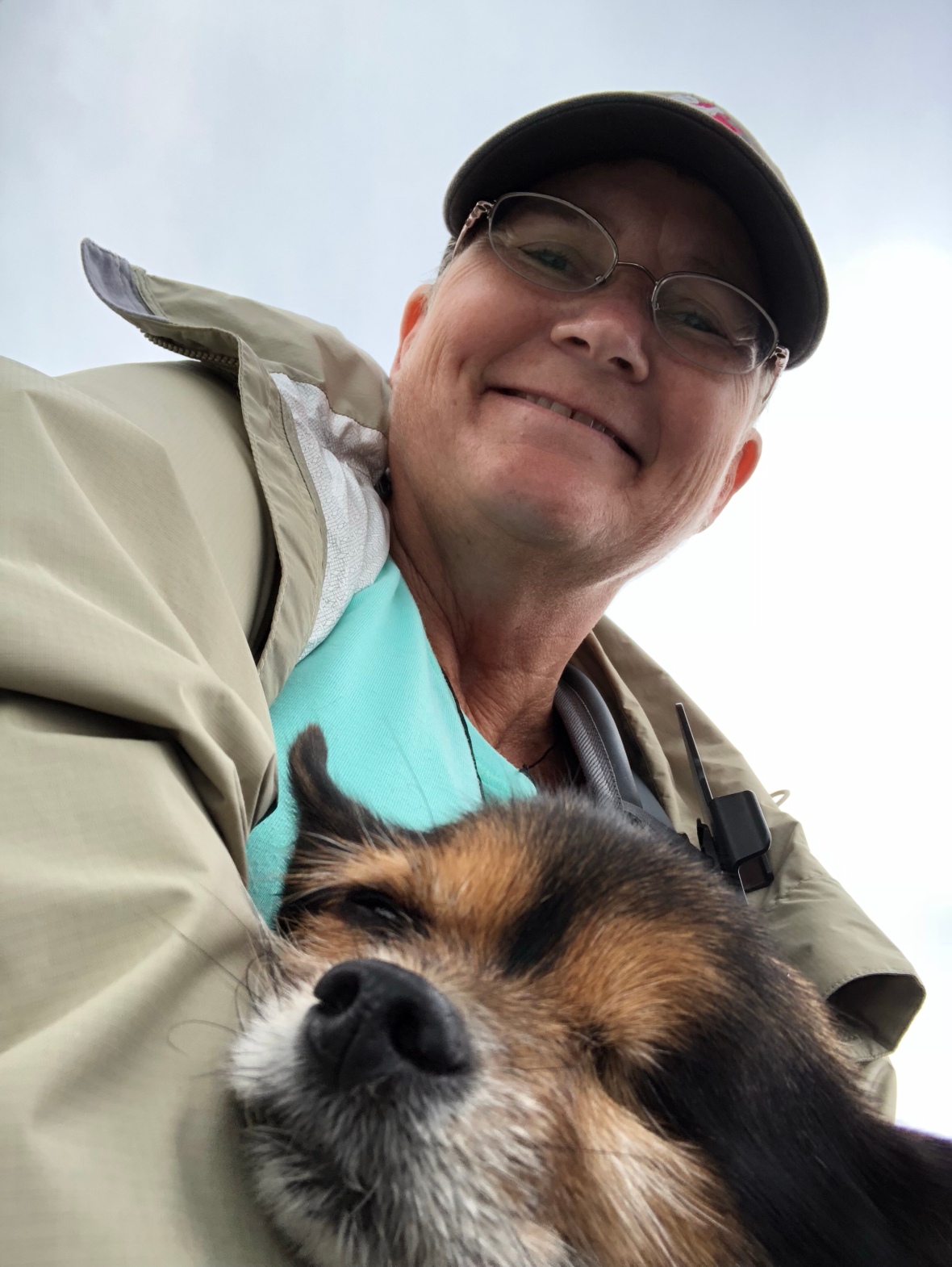 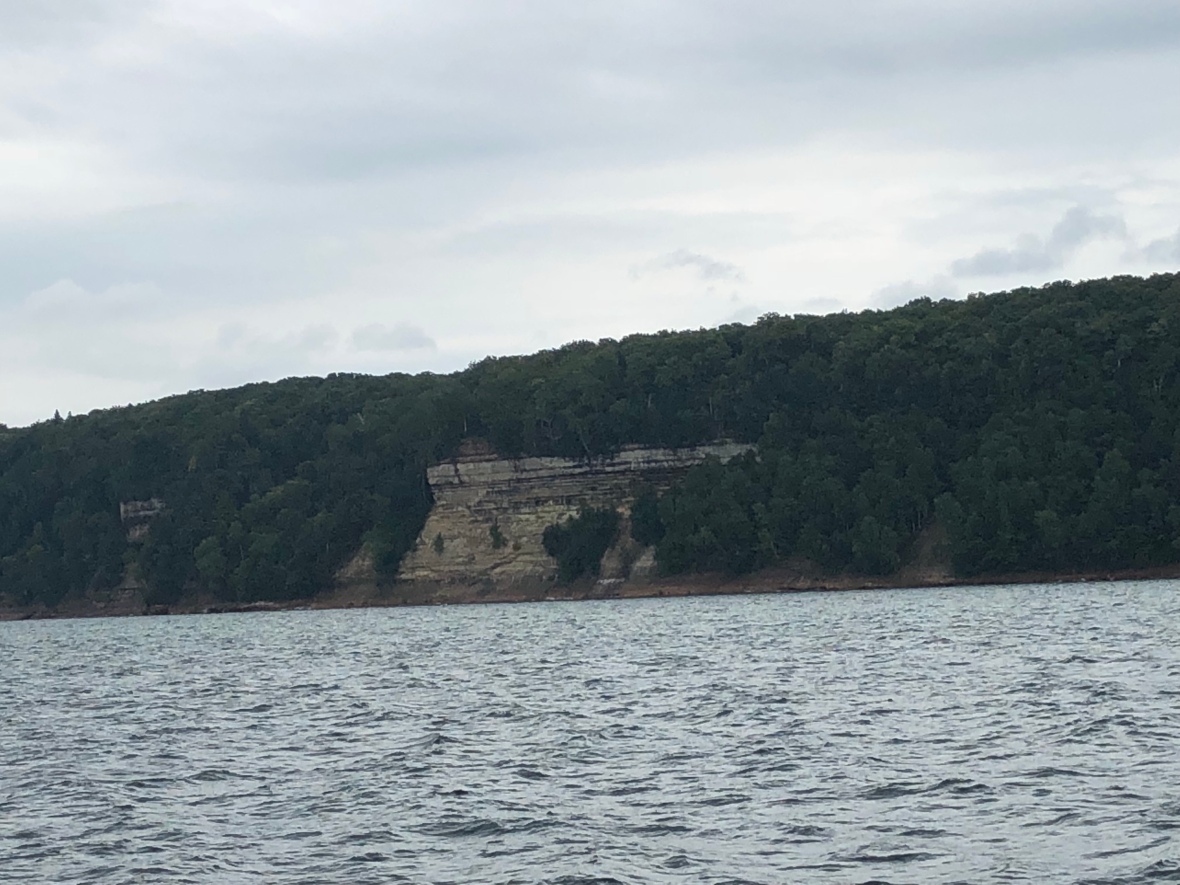 Pretty difficult to get a panoramic shot on a bobbing ship! 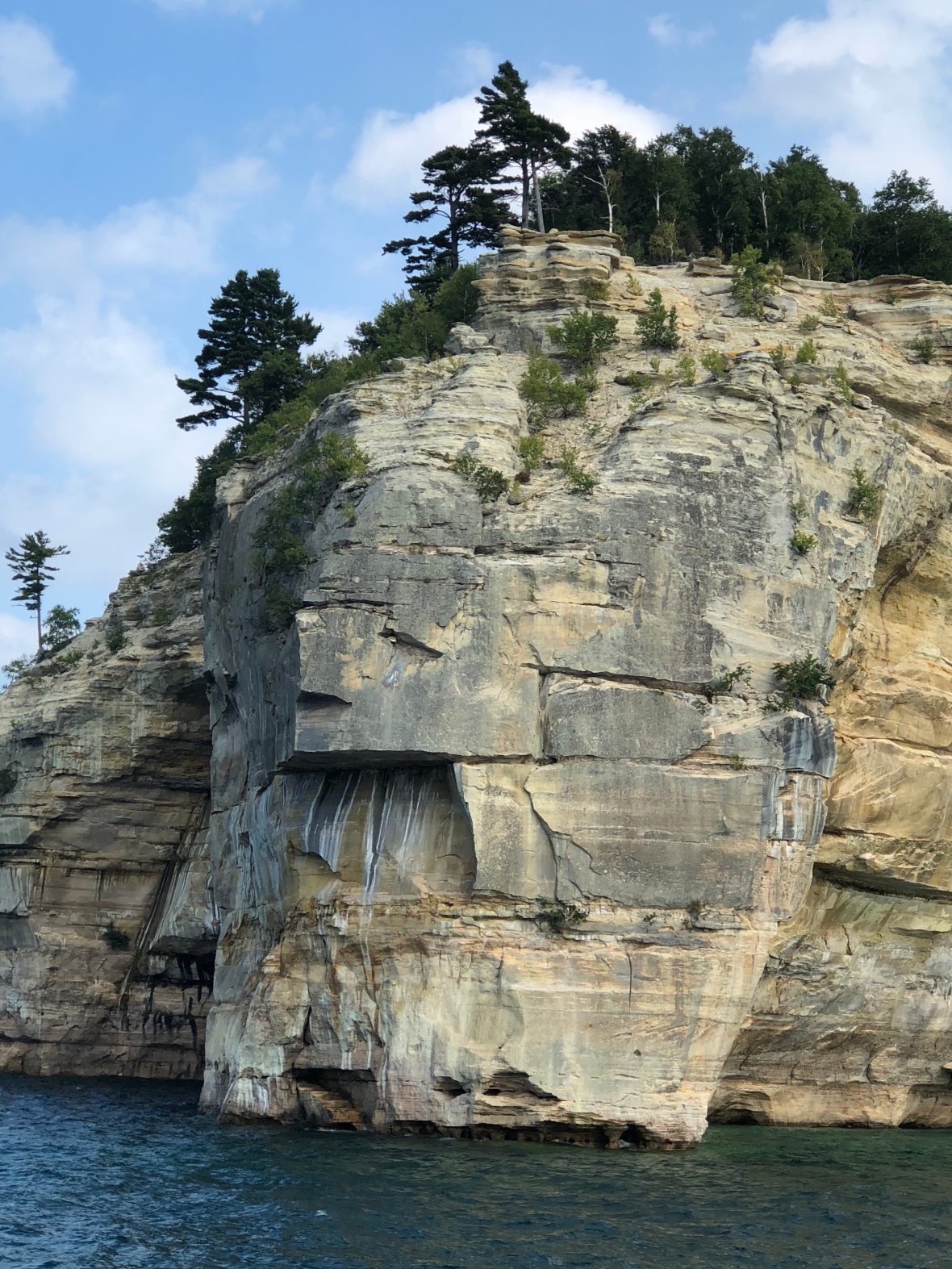 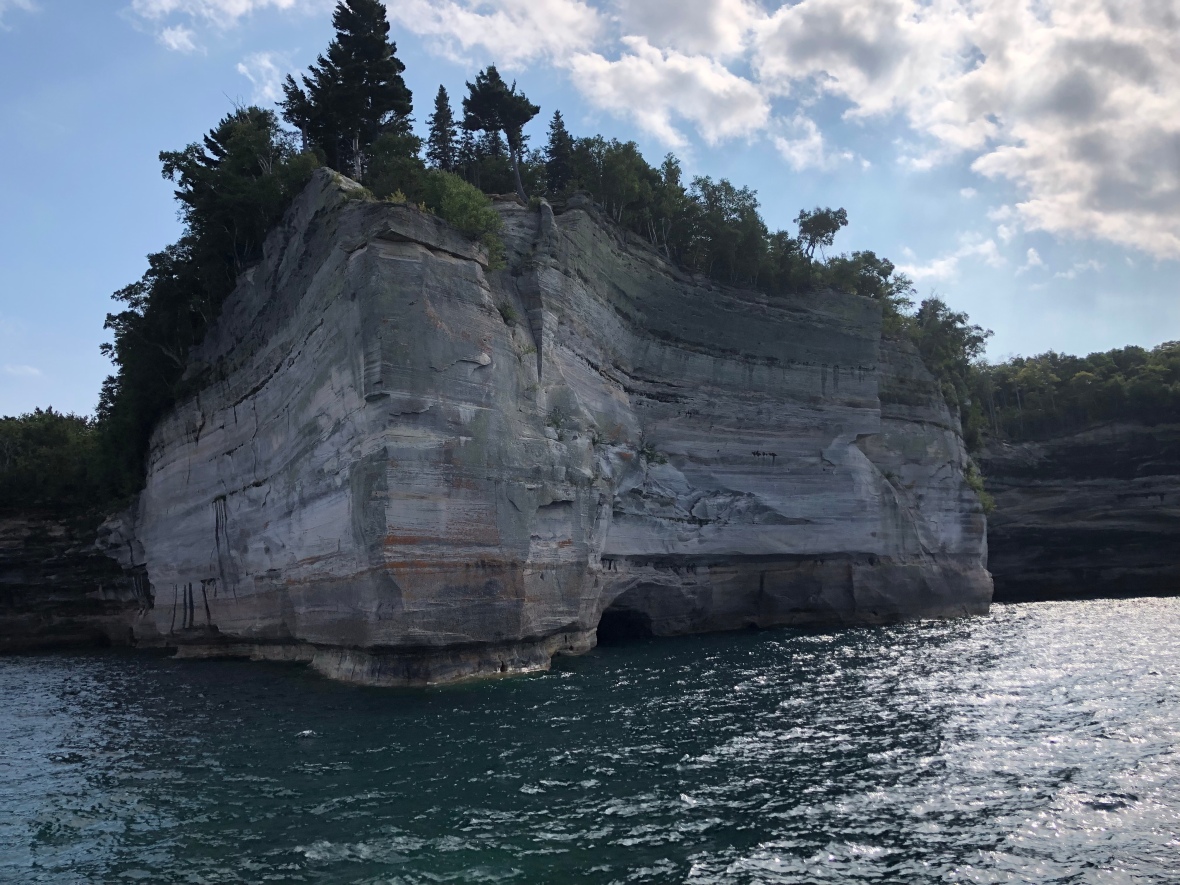 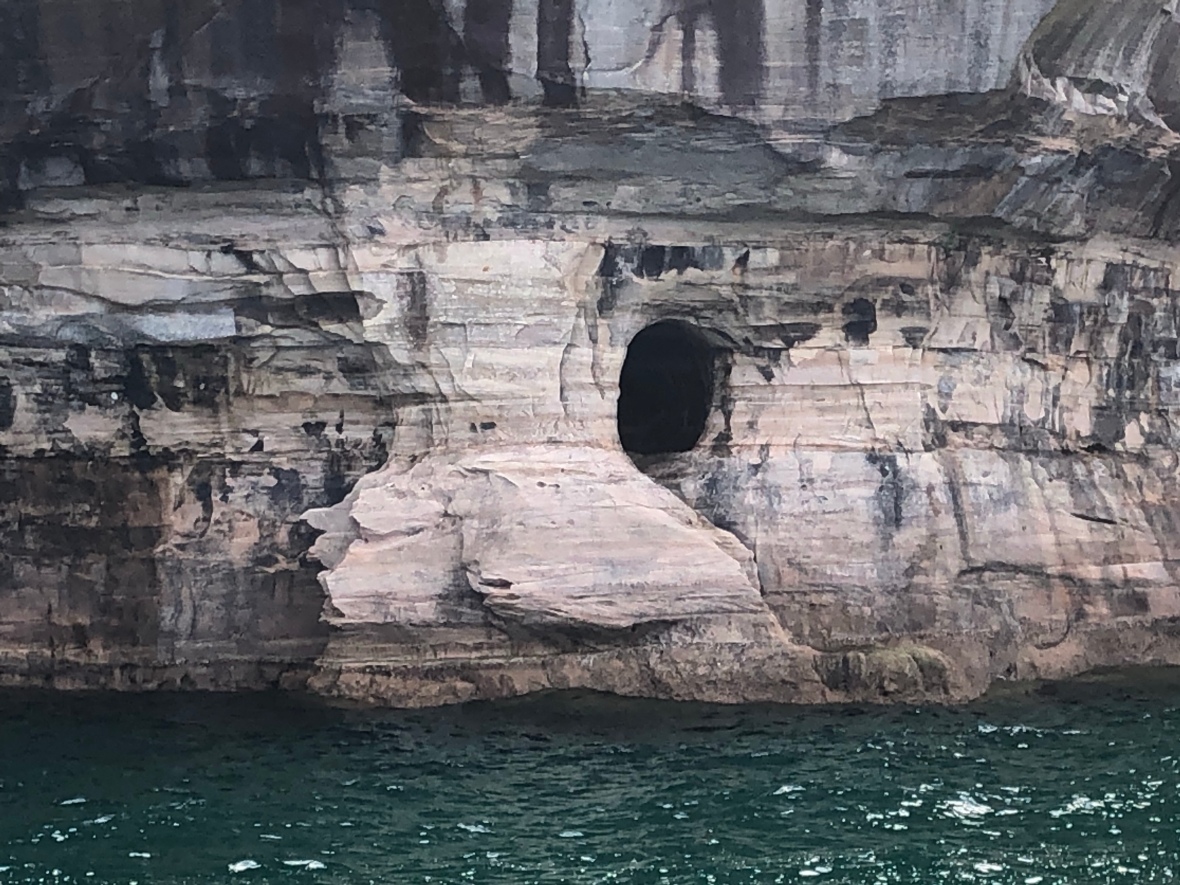 And the final round. 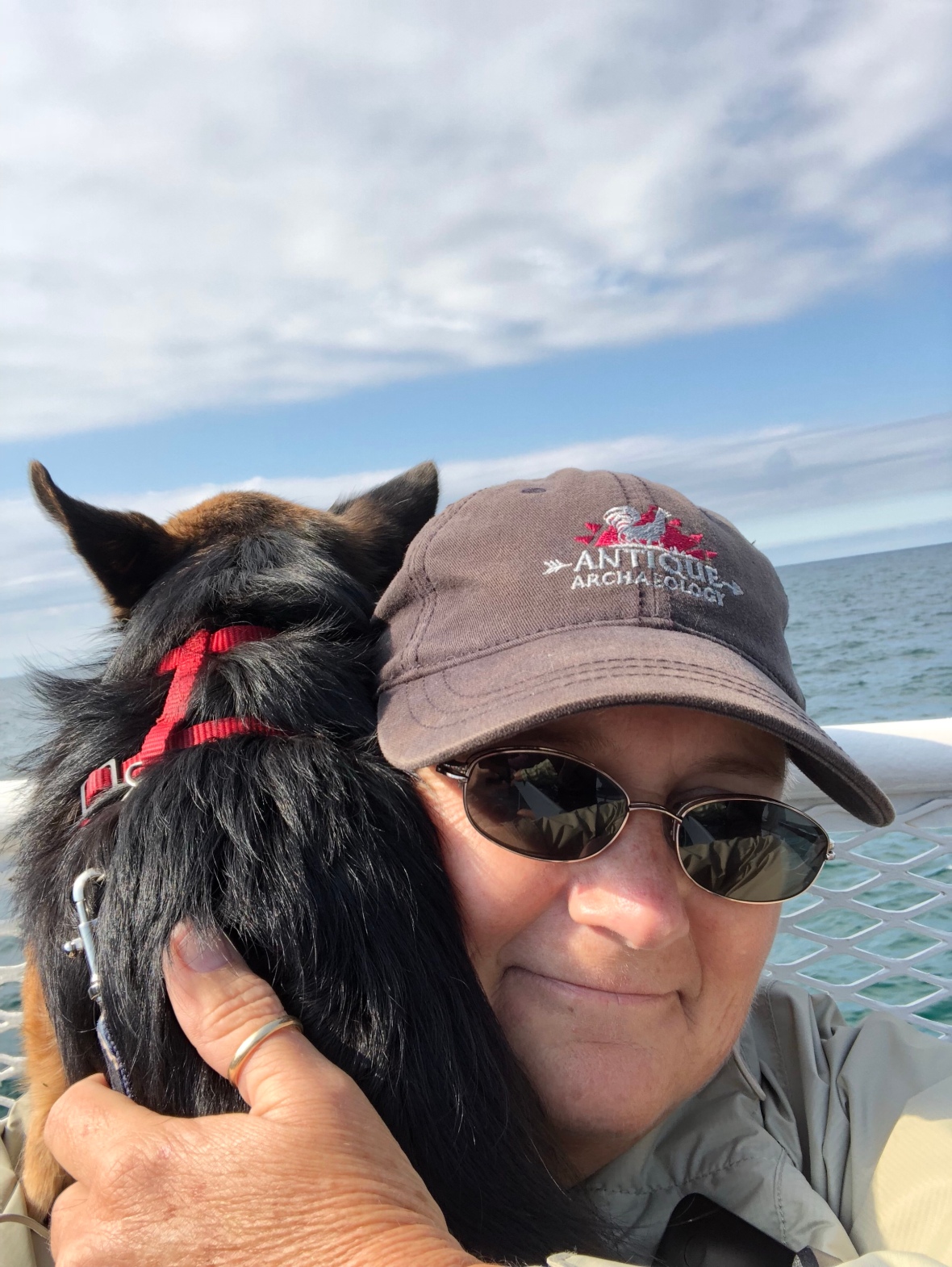 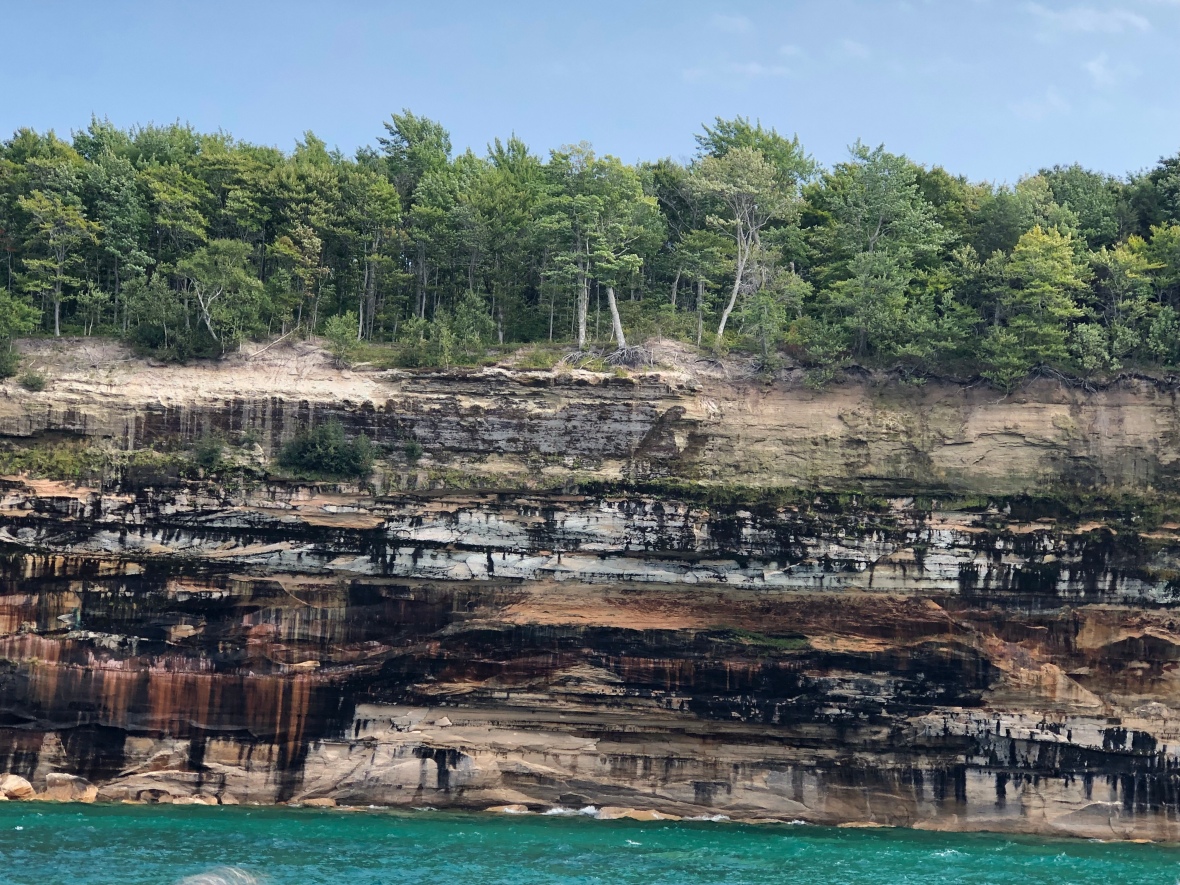 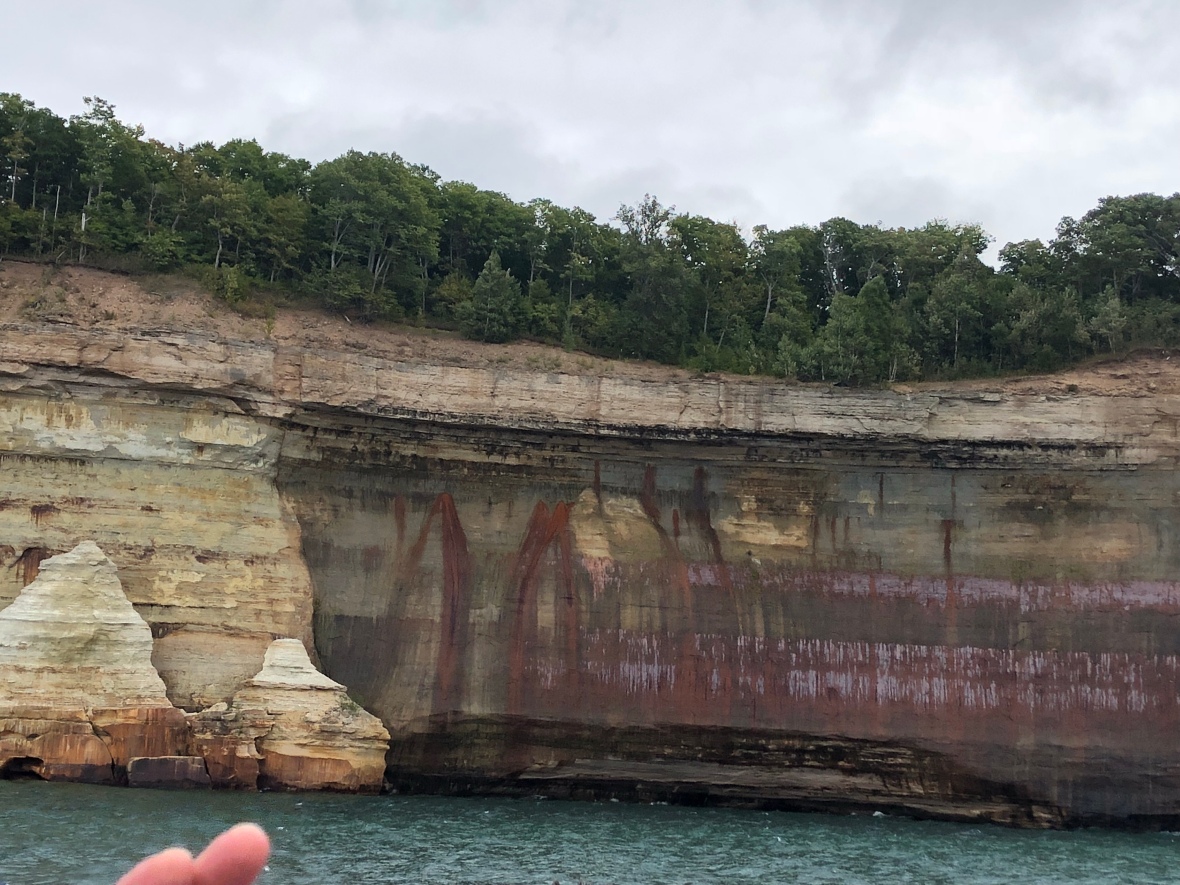 The trip has been fabulous. I haven’t made the progress westward that I thought I would in the time but I have had a blast.

Planning where to stay each night is a little stressful and more costly than anticipated. I purchased a Michigan recreation permit for $32 which was worth it. It is required for camping or pay $9 fee on top of the camping fee. State parks are also $9 and with permit there is no charge. I’ve paid as little as $0 and as much as $35/night. Making sure I have $5 & $1 bills is important for the self pay campgrounds. They are $9, $15, $16, per night. Not sure why they are different. I use campendium a lot but will try to use Boondocking and RVparky more. I attempted to use a member site I joined called Boondockers Welcome where folks open there property to people looking stay for free. Sometimes it’s a driveway for one nighters and sometimes it’s a cow pasture set up with hook ups for RV’s. The first request was declined because they never answered and the most recent one was declined because I didn’t respond. Well, I never received a notification from them, maybe I’m doing some wrong.

Navigation at times is challenging. But between iPhone maps, google maps, Garmin GPS, paper maps, road signage and common sense I have managed pretty good. Being by yourself you have to stop and orient yourself sometimes and reroute.

Sleeping has been good. I wake up usually during the night but that’s not unusual. I try to select a level campsite and when looking on the state park website has descriptions of the sites that include if it’s level or no.

Eating has not been an issue. I have cooked or eaten cold food for lunch most of the time. Due time or weather I chose to eat out or just because it was a good experience. I do like to treat myself to ice cream on occasion since that is something you really can’t take with you. Went to the grocery store a couple of times. I filled my water the first time but this last time they didn’t have a fill station. I also carry 2 5 gal collapsible water containers for dishes and such. When I was on the lake I filled my collapsible bucket with lake water for rinsing hands and feet.

The solar power has worked well. I haven’t worried too much about sunny campsites. I just park in the sun during the day. Since it’s cooler now I’m only running the cooler and charging my phone.

The van has worked fabulously. No issues what so ever. I think I average about 24 mpg. I only paid over $3 for gas once since I left. I still have plenty of gas cards (I bought a ton over the past year in preparation for the trip). I haven’t used them everyone but most of the time. I try very hard not to let the tank get below half before I fill up again.

Cleanliness hasn’t been an issue. I get the occasional shower/bath and use disposable wipes in between. I made my own using essential oils ( theives, tea tree & lavendar), bounty paper towels and Castile soap and water. They work great. Have done laundry once. Need to do it again.

Security hasn’t been an issue either. That one time in the discoursed campsite was the only time I felt uneasy and I’m sure it was all in my head.

I do miss my family and friends but loneliness has not been an issue. I enjoy the solitude and my own company. Daisy is a big help with is too. I’m calling her pinecone since she somehow got into pine sap.

Daisy has been taking it all in stride. She sits by the van around dark waiting to go to bed. Lol. When we hike she sometimes walks and sometimes I carry her. I take her in most places including grocery stores. I sometimes get looks but I just ignore them. Most of the time she attracts more attention than I want. It forces me to engage with people! I feel like getting a sign that reads:

“I am a Chorkie, my name is Daisy and I am 10 years old. Yes, you can pet me unless you a kid that’s going to jack me up” 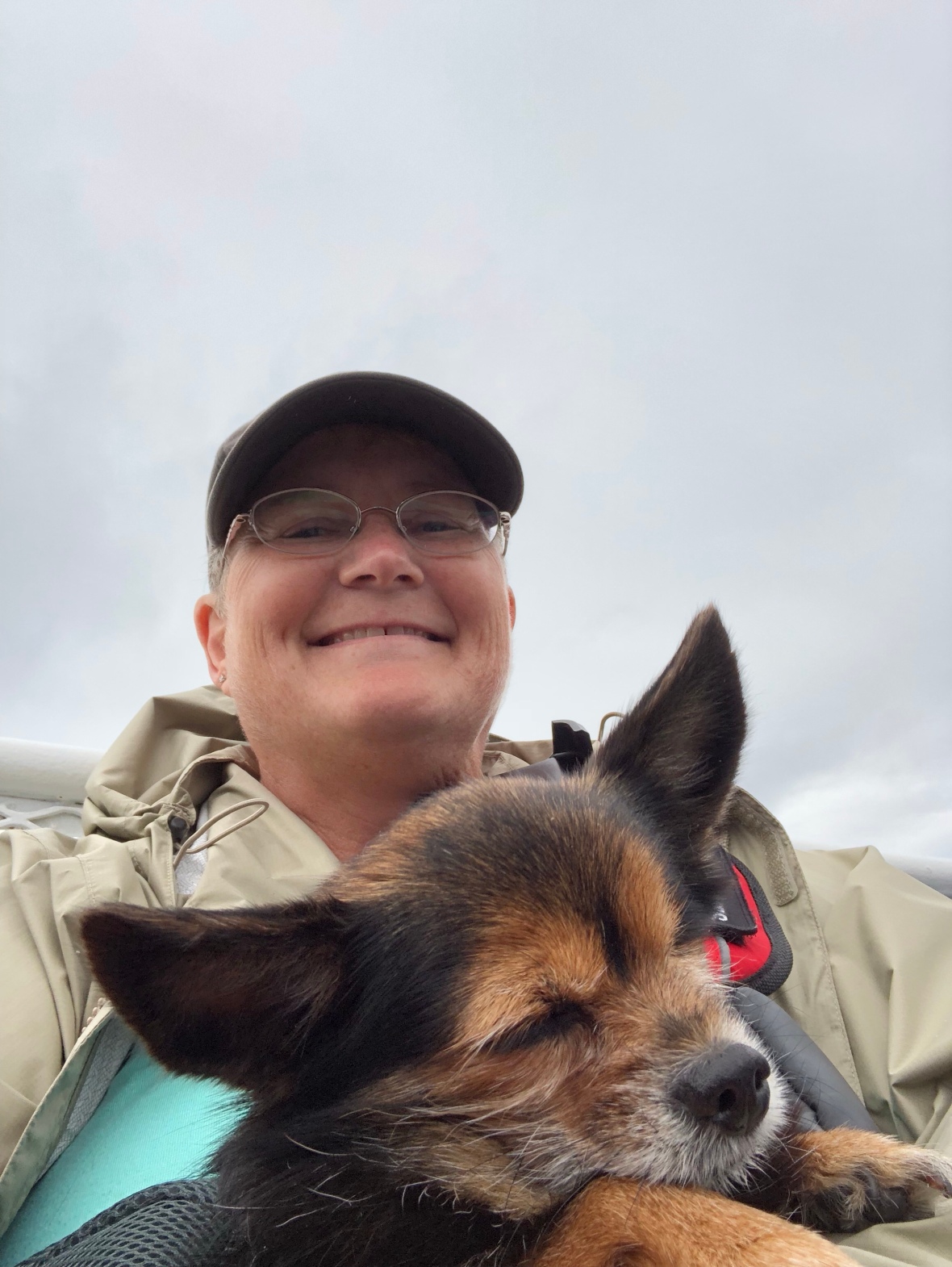 Cell service had been pretty good until I got to the UP. Not a problem except for navigation and blogging.

Let me know if there is anything else you want to hear about.